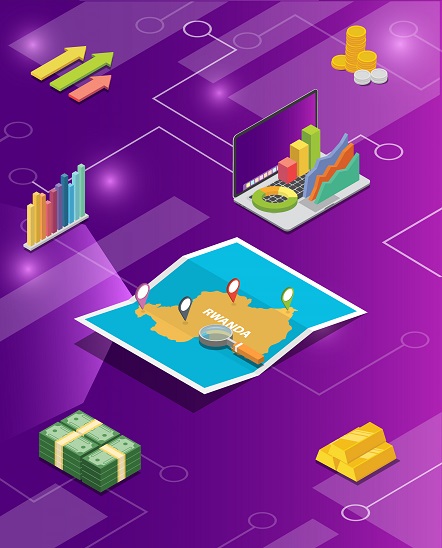 For the past few decades, African countries have been making leaps and bounds in the development of their tech sector. And none more so than the East African country of Rwanda. The Rwandese government has gone on record stating that it aims to convert the country into the “Singapore of Africa” — in other words, a regional high-tech hub. And looking at their economic growth over the past decade, they are well on their way to achieving this goal.

While Kenya may be the East African country with the highest concentration of tech companies, Rwanda has become the country to watch in the region due to its rapid growth in the tech scene. In just five years, the landlocked nation went from a negligible 4G internet coverage to boasting 95% coverage throughout the country in 2019.

This has facilitated the digitalization of many services in the country, among them financial services, agriculture, administrative services, and health services. Digitalization initiatives in the last sector are likely to have contributed to the massive trust Rwandans currently place in their health care system — 97% of Rwandans have confidence in the country’s health institutions. Their high-level health services also helped drastically curb the effects of COVID-19 there.

The digitalization of transportation services

Rwanda’s exceptional 4G coverage has also made possible the adoption of smart technology in the nation’s public sphere. This is exemplified by the recent introduction of an innovative product for the bus system in Kigali, the country’s capital. Called the Tap&Go system, it enables city commuters to pay for their bus fare by tapping a card on a card reader installed on the bus. They can buy this card from a Tap&Go service agent at any given bus park.

Commuters even have the option of buying their ticket and planning their trip online through the Tap&Go website, or on their phone through the Tap&Go app. Both of these options give them a QR code — the square digital barcode that can be scanned with a smartphone — which is then scanned by a bus validator when they enter the bus.

This is all powered by the Wi-Fi connectivity now available on all public transportation, which was made possible by the widespread 4G coverage in the country. Tap&Go has become a key component in the Rwandese government’s efforts to create a cashless economy. And bus drivers in Kigali have reported a sharp rise in their revenue thanks to this innovative system.

Tap&Go was brought to Rwanda by the AC Group, a leading tech company in the country. Their success story highlights another reason for Rwanda’s rise in popularity in Africa’s tech scene — the Rwandese government makes it very easy to do business in the country. For example, foreign entrepreneurs looking to launch a company in Rwanda are offered a visa, free working spaces, a steady rule of law, and a quick registration process.

But next to the accomplishments of the AC Group, Rwanda’s profile was raised even higher by another ambitious tech project that has drawn even more international eyes. The country was namely the inaugural location for the launch of the Mara Phone in October 2019. This is the first-ever smartphone to have components that were all manufactured on and from African soil. It was produced in Kigali and may challenge the dominion of Chinese phones in the African mobile phone market.

With its higher-end features, such as fingerprint sensors for unlocking the screen, the Mara Phone is also a model of African quality. It has been exported to over 50 countries and its modern features and design have garnered many fans in countries like Germany, Switzerland, and Nepal.

It goes without saying that Rwanda’s high-tech ambitions are greatly aided by their digitalization practices and business-friendly environment. But in the case of the Mara Phone, in particular, the invention does face the challenges of low smartphone penetration and digital literacy, especially in rural areas. And its pricing does not help matters — the Mara X and Mara Z cost 175,750 Rwandan francs ($190) and 120,250 Rwandan francs ($130) respectively. Those prices are very steep in a market with smartphones that can cost as little as 35,000 Rwandan francs ($37).

However, plans are in motion to tackle these issues. The Mara Group, which owns the Mara Phone, aims to distribute the phones at a cheaper price by the end of the year. Also, digital ambassadors are boosting computer literacy, and by extension digital literacy. And a government-supported campaign called Connect Rwanda is aiming to increase smartphone adoption as the country continues to take steps towards becoming a digital economy.

How does the future look for Rwanda?

To be sure, there is still widespread poverty in Rwanda. And the Rwandese government is somewhat authoritarian. But the country’s yearly GDP growth remains among the highest on the continent and its corruption levels are also low compared to neighboring countries. And its initiatives to produce from local soil, such as with the Mara Phone, also make it a prime example of self-reliance for other African countries. So does Rwanda have what it takes to become one of Africa’s major high-tech hubs? The answer is an emphatic yes.