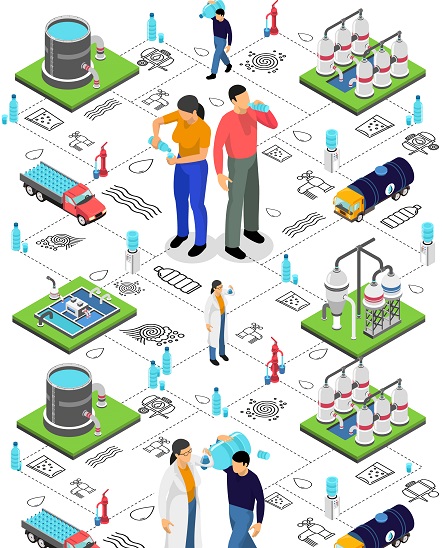 How much do we know about the global water crisis?

In 2018, the World Economic Forum released its annual Global Risk Report and it was an alarming break from history. This report namely highlights the top five threats humanity will face in the next decade and for the first time in the organization’s nearly fifty-year history, not oil crises, not financial crashes, but ecological disasters rounded out the report’s list of the five biggest dangers the global population is currently facing.

We can say with some certainty that the scope of four of those five disasters — biodiversity loss, extreme weather, climate change, and pollution — is moderately well-known to the public, but it is debatable whether the acuteness of the fifth has made its way into our collective consciousness.

It is namely the global water crisis and it is much more dire than we imagined.

As of early 2020, 900 million people do not have access to clean drinking water and, even with the advent of the COVID-19 pandemic, diseases resulting from the consumption of unsanitary water continue to retain their rank as the world’s deadliest health afflictions, killing some 3.4 million people a year, most of them children. But there is good news, the extent of this crisis did make its way onto the radar of some of the world’s leading technological players and they have been working to come up with solutions to one of the world’s most critical problems.

One of those players has become particularly noteworthy for being so vocal about this cause and working so tirelessly to bring about its solution. His name is Dean Kamen and if you haven’t heard of him yet, you definitely should have.

Dean Kamen is providing many people with safe water

Dean Kamen is an American engineer and inventor known for his invention of the Segway, a self-balancing electrically-powered portable device with two side by side wheels, and the iBOT, the electrically-powered wheelchair. His lifestyle has also drawn considerable attention — he lives in a fortress with hidden rooms and helicopter launchpads on an island off the coast of the U.S. state of Connecticut that he privately owns (and for which he even established a constitution).

In the early 2000s, consternated by the statistics on clean water scarcity, Kamen started developing what would become the water purification device Slingshot. This device takes anything from polluted groundwater to urine and runs it through a distiller that produces clean water. One machine can produce enough clean water for 300 people a day and it is capable of running off of any source of combustible material, including dried cow dung.

After receiving good results from testing this device in several remote villages in Ghana in 2011, Kamen struck up a partnership with The Coca-Cola Company to get this device on the ground in rural parts of countries in Africa and Latin America, where the need for access to potable water is the highest. It was a barter deal in which the company would use its vast distribution network to get the Slingshot to these countries in exchange for Kamen building them a better soda fountain.

Both delivered. Kamen built the soft drink giant a beverage dispenser that uses technology to mix over 150 different beverages and Coca-Cola, for its part, formed a coalition with ten other organizations to get the Slingshot to 150 locations in eight countries. The device formed a focal point of Coca-Cola’s initiative of Ekocenter kiosks, which get safe drinking water, internet access, and first-aid supplies, among other necessities, to remote low-income communities. This initiative started in 2013 and by 2017, the Slingshot was serving 78.1 million liters of safe drinking water to these communities.

This kind of story illustrates that, while technology is key to solving the world’s ecological challenges, collaborative efforts that tackle these issues will prove to be our real saving grace. And Dean Kamen and Coca-Cola are not alone in their efforts. The Skysource/Skywater Alliance is also contributing to the cause with their WEDEW invention (Wood-To-Energy Deployable Emergency Water), which won them the $1.5 million Water Abundance XPRIZE prize from the XPRIZE Foundation — a non-profit organization that hosts high-profile competitions, with corporate and government partners, in which contestants come up with innovative inventions to solve global challenges for large monetary rewards.

Let’s have a look at this alliance and its invention.

As the name suggests, the Skysource/Skywater Alliance is a collaboration between two companies — the California-based Skysource and the Florida-based Island Sky. The WEDEW system combines the latter’s Skywater atmospheric water machines — that use air-to-water technology to extract water from the humidity in the air — and biomass gasification, which is the process of converting either purposely grown energy crops (plants), waste from animal farming, or even human waste from sewage plants into hydrogen gas and other products.

This process keeps carbon emissions low and in the WEDEW variation, it can extract 2000 liters of water from the air at a cost of 2 cents a liter using anything from wood chips to seashells and can run on solar and battery power. And as the daily water needs for a planet of 7 billion-plus are between 350 and 400 million gallons a day, this technology is just what the doctor ordered. And adding to its appeal, it can be used in any climate and is not deterred by polluting elements found in the atmosphere of urban areas as it cleanses these contaminants in its process.

The future of clean water distribution

While devices and systems like the Slingshot and WEDEW have by no means magicked all of the world’s clean water problems away, they do give a positive outlook should structures be put in place to get them into commercial production or wide use. The cautious optimism they provide is amplified by the fact that there are more initiatives out there contributing to the cause, such as the Bill Gates-backed OMNI Processor and the JMCC WING Generator.

The former converts the human waste collected from pit latrines into safe drinking water and electricity and the latter is a technologically advanced wind turbine with multiple blades that can generate electricity off of a breeze of just five miles per hour — incidentally, the JMCC WING team was the runner-up in the XPRIZE Water Abundance competition as this generator can also extract water from the air when attached to coolers and compressors.

These technologies are poised to revolutionize the way water is distributed in many countries and set off a shift from antiquated infrastructures towards a decentralized water distribution system that gets safe water to water-starved communities faster while also placing its round-the-clock accessibility in their hands.

And as for the other four great ecological challenges in the Global Risk Report, technology is converging on them too. All you have to do is look at the current price of solar panel production for some indication — it has been cut to three hundred times less than what it was some forty years ago. Also, several key technological inventions are being used to combat deforestation, foster reef restoration, and allow us to harvest more from far less land as part of specialized campaigns to reverse the factors that are leading to mass biodiversity loss. But, again, only throwing technology and money at the problem won’t solve it. It must be paired with sustained collaborative efforts across disciplines, generations, and borders. And sooner rather than later. But looking at the collaboration between Skysource and Island Sky and the Dean Kamen/Coca-Cola partnership, we may well be on our way to sooner.