2021: 3 Tech Trends In Hospitality You Should Be Aware Of 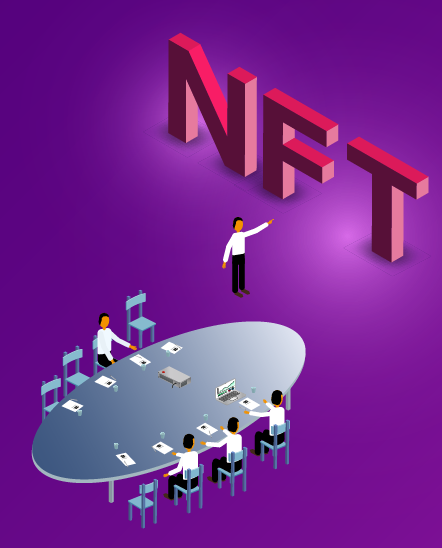 There’s a whole new universe out there and it’s blowing up! A profound introduction to the world of NFTs

In case you haven’t heard, the world is currently being enraptured by a wave of digital art and assets in the form of NFTs (non-fungible tokens). And they are generating big business and offering a whole new stage and marketplace for digital creations. To give you an idea, this past March the large auction house Christie’s sold the NFT of the digital artist Beeple for US$68 million. And in February, sales of NFTs reached, wait for it, US$500 million.

How did we get to this point? The answer can be found somewhere between the current digital currency / crypto boom and a spike in asset values within this industry fueled by speculative activity and enhanced activity by new entrants in this space. This is partly due to how people are spending their stimulus checks in the US, in addition to lockdown boredom there and low interest rates. And their inclusion in the collections of large fine art auction houses like Christie’s and Sotheby’s has also been a big boost to their value.

But before we continue, let us back up and get a grasp on the basics. What are NFTs exactly? And how do they work?

The basics of NFTs

As previously mentioned, NFT stands for non-fungible tokens. This means, more or less, that the token is unique and nothing else can take its place. For example, a bitcoin is fungible because if you trade one for another bitcoin, there will be no difference between what is being given away and what is being received. But a one-of-a-kind trading card is non-fungible because when it is traded for a different card, there will be a clear difference between the two.

How they work: NFTs are assets that can be traded on a blockchain, the digital ledger technology behind cryptocurrencies like bitcoin and dogecoin. The majority of them are currently part of the Ethereum blockchain, but any blockchain can make its own version of it.

And they can be anything digital: drawings, music, even this article can be turned into an NFT. But much of the current hype is centered around using this technology to sell digital art and this shows great potential for as yet unknown artists.

The Curaçaoan artist Giovanni Zanolino could not agree more.

A word from a visionary artist

Zanolino recently became the first Curaçao native to officially sell an NFT in a foreign market after he sold his artwork to collectors in the US. He has amassed himself a considerable international following on Twitter under the handle @GioZanolino. His work has even drawn the attention of the mysterious and massively influential NFT collector, 888, who made one of Zanolino’s artworks his Twitter display picture. Giovanni is working tirelessly to draw more like-minded artists to the NFT market in Curaçao, with projects with CryptoPunks (more on this art project later) and an endeavor to combine the art-making process with Artificial Intelligence.

Here his venture into the NFT world, in his own words:

“My road towards NFTs actually started a few years ago when I started blogging about my art on a US-based digital platform for artists. At the time I was doing this to share about my artistic process, connect with other artists on the platform, and receive digital currency payments for my art. I eventually decided to take a break from the platform but I recently took it back up and when I did the NFT world opened up to me. I saw how these fine art auction houses like Sotheby’s and Christie’s were suddenly selling all kinds of NFT art from artists I knew about for exorbitant prices. Some of these artists had been giving away their art for free for years before discovering this digital marketplace.

And that gave me pause because I had been following these artists for quite some time and it was quite a revelation to see them now capture the imagination of big international collectors. This made me realize that this market is filled to the brim with opportunities for international artists like me. It also gives more power to us as creators of art. Because artists can attach stipulations to an NFT that ensures that they receive at least 10% of the earnings every time it gets resold. This means they will also benefit greatly if their work increases in value. Imagine if Vincent van Gogh had had this in his day — his descendants could have at least received some of the large proceeds from his work instead of it all going to art dealers.

Also, because this digital market is essentially borderless pretty much anyone can have an instant international audience on it. All you have to do is network. And the same goes for companies, an entrepreneur living in New York can suddenly find himself with investors from Australia or Dubai and gain entry into those markets.

We in Curaçao need to ride this wave because we are witnessing a shift, an explosion of new money and it’s going to the younger generation. I foresee that this change will bear similarity to when electricity was invented — first it was a novelty but then it became an indispensable part of everyday life.

If Curaçao were to invest in a handful of local artists to put their art on this digital marketplace, we will see how these artworks will be valued the way they should be valued on the international market, earning thousands or even tens of thousands of dollars. Because these are the going rates for good artwork in the NFT world.

Another thing I find particularly appealing about joining the NFT market is that it fosters collaboration among its users. Curaçaoan artists will not easily promote other Curaçaoan artists because they are already expending enough energy promoting themselves. But on this online market, it behooves the artists to promote each other because the more they promote each other the more attention to this community and their work. And this increases their value to international collectors. I myself was promoted by Dirk Van Der Meer who is active on Twitter under the handle @Durkatwork. He is another artist based on the island.

I hope to one day help launch a digital museum on the island because I truly believe we have the capability to use this technology to bring top art here and to export our art to the top locations of the world. We have the quality on this island to break through into any industry.” 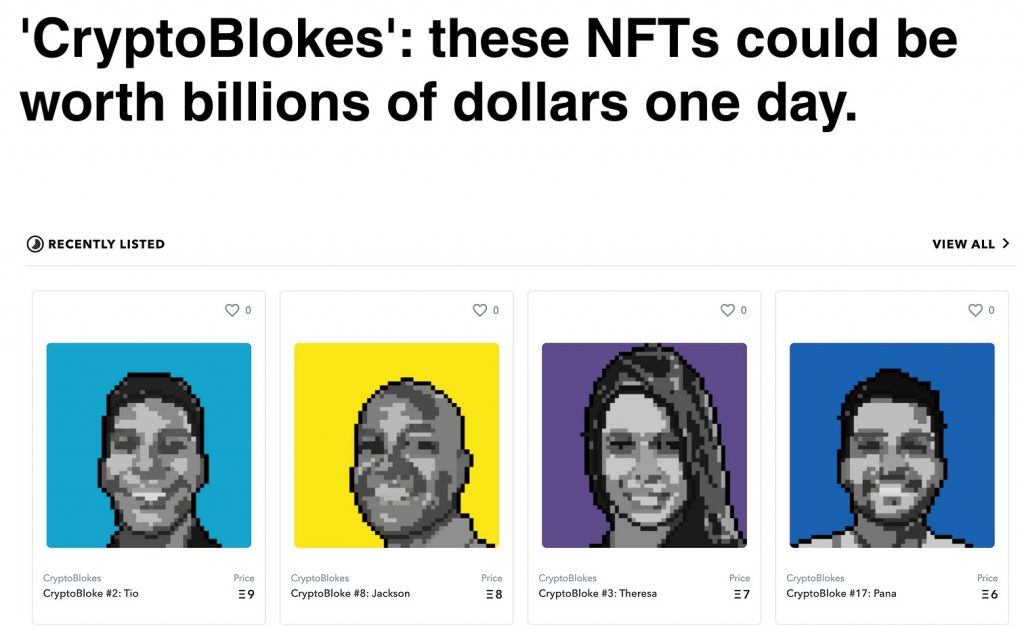 I myself am also a contemporary artist and have taken the plunge into this digital universe. Riding the wave buying NFTs, together with Zanolino, I even rolled out a parody NFT art project titled: ‘CryptoBlokes’. As described on the largest NFT marketplace OpenSea, “The CryptoBlokes are the first NFT created with the goal of becoming billionaires. Collect them, as they go from broke to billionaires. A fixed set of 20, they were launched in 2021 amidst the NFT (ERC-721) craze. They were sent on a mission by contemporary artist Boudino de Jong and represent himself and colleagues from the digital agency where he works.” That agency is Profound, duh! Even you can join this parodic rat race and buy a ‘CryptoBloke’ for as low as 0.1ETH, whilst supplies last. Who knows, one day that NFT could be worth a fortune!

The potential for businesses

Giovanni is most certainly not wrong when he speaks of the potential in other industries. NFTs create opportunities for new business models that didn’t exist before. They have the potential to completely change the rules of ownership. Transactions in which ownership of something changes hands have usually depended on layers of middlemen to establish trust in the transaction, exchange contracts, and ensure that money changes hands.

NFTs will change all of that. Transactions using NFTs are namely registered on blockchain technology. And that makes these transactions reliable because the information cannot be altered. Smart contracts can be used in place of lawyers to automatically ensure that money and assets change hands and both parties hold up their end of their agreements. Businesses, especially start-ups and SMEs, will benefit greatly from these kinds of contracts.

And, as previously mentioned by Zanolino, the NFT world also offers companies in small markets unprecedented opportunities for expansion with its borderless community.

The latest developments on the market

The tech studio Larva Labs has created some very popular NFT projects, among which CryptoPunks, and they recently hit another home run with the creation of Meebits. This is an NFT collection of 20.000 3D characters that are tradeable on the Ethereum blockchain. And they are all the rage this week, generating US$75 million within just 8 hours. This hype was partially due to influential NFT collectors, who created additional hype for Meebits within the community.

Christie’s will be auctioning 9 Punks for the first time

In 2017, Larva Labs created the art project CryptoPunks. Today this is widely regarded as the beginning of the digital art (also known as CryptoArt) movement, so in essence the beginning of the NFT movement. And this coming May 11th, 9 ‘Punks’, as the artworks are called, will be appearing in Christie’s 21st Century Evening Sale auction in New York. This is a first for CryptoPunks and marks a milestone for the revolutionary NFT project.

NFTs show extraordinary promise for many industries in the Caribbean and Latin American region if tapped into wisely and collectively. And for those who think this is simply a passing fad: people thought the same way about the dot com bubble in the 1990s and look at how the meteoric rise of Amazon has proven them quite wrong. This is the future. And it has profound implications for the business world. As Giovanni said: Let us ride this wave now. Because we most certainly don’t want to be left paddling without a board in the flat water of missed opportunities. 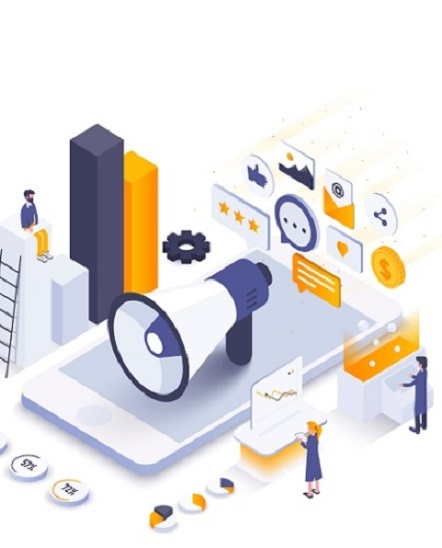 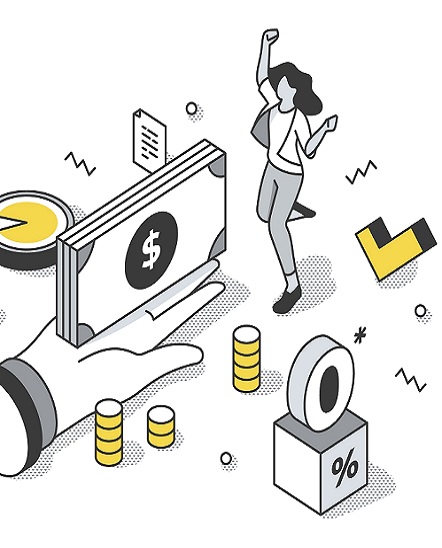 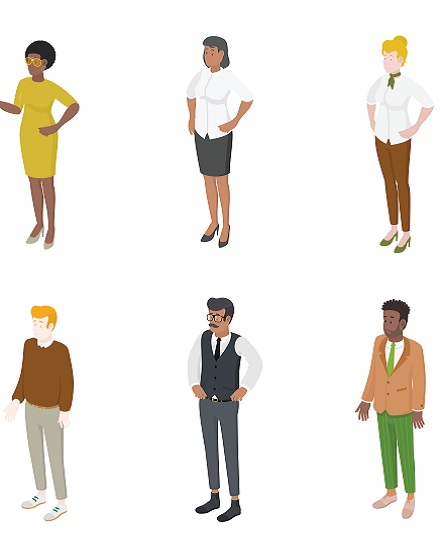