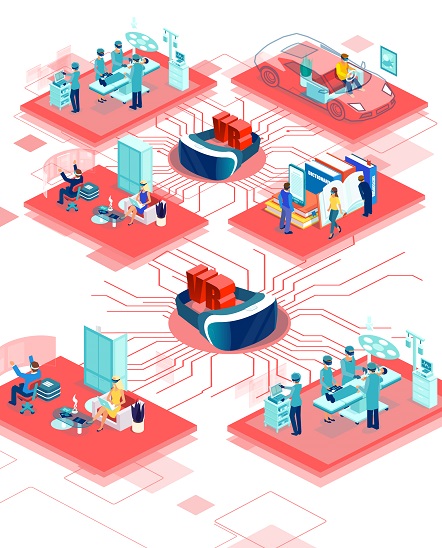 The migration to virtual reality will make history

Throughout history, migration has been a driver of innovation. Take for example the mass migration of Germans of Jewish origin to the United States in the early 20th century. This exodus caused a surge in innovation in the US. According to a recent study, between 1920 and 1970 every American technical field entered by German Jews saw a 70% increase in inventions.

And the output of major companies in the U.S.’s modern era further illustrates the power of immigration. From 2001 to 2014, every company that employed highly-skilled foreign-born workers saw an increase of 2% in their production of innovative new goods or services. And in 2016, half of all startups valued at $1 billion were founded by immigrants, each creating 760 jobs.

This bears a very strong significance for our future because the world is currently facing a volatile job market. This market may continue to shrink and change significantly in the future as a result of automation. We will need new jobs to replace those eventually being absorbed by robots and AI. The last one is particularly interesting since technology will be driving a historic new kind of migration in the future. The migration to virtual reality. And here’s the twist: it can actually create jobs and this may be happening sooner than you think.

But first, we must ask ourselves: what will living in a virtual reality look like? One scenario is uploading our minds to the cloud.

Uploading your mind to the web

Assuming the required technology of simulation and artificial neural networks — the component of artificial intelligence that is meant to simulate the functioning of a human brain — works perfectly, living in virtual reality will look something like this. Your brain will be scanned in great detail and recreated in a computer simulation, imbued with your memories, emotions, and personality. This can be done on any online platform.

You would in fact upload your mind to the internet and continue living on in cyberspace as an avatar (an online personality). And you could create a community with people who have done the same thing, including people who’ve passed away. Imagine having a family dinner while your grandmother joins you on the laptop screen through her avatar in virtual space. It may take some getting used to at first but it’s a distinct possibility.

That’s one scenario and, admittedly, it may be a bit longer down the line. But the second scenario has already started taking place in our time, and it’s the one that can create jobs.

One thing to note about virtual reality is that its immersive nature engages all six of the pleasure chemicals inside the human brain. This makes it very addictive but it also adds something else to the mix. Through its stimulation of these pleasure chemicals, it also creates a state of peak performance called the flow state.

This is quite meaningful. In a period spanning over fifty years, many psychological research tests showed that the people who have this flow state in their lives score the highest for life satisfaction. So being employed through virtual reality does not equal being a zombie.

In fact, Ailin Graef, a German-Chinese computer scientist turned entrepreneur, is a clear example of just how lucrative this world can be. In 2006, she became the first person to become a millionaire solely through business ventures in virtual reality.

How did she do it? First, she created an avatar named Anshe Chung (for only 10 dollars) in Second Life, an online virtual world developed and owned by the San Francisco-based firm Linden Lab. She then started investing in real estate in Second Life, investing in plots of land in this world and selling it to other avatars. There are more online virtual worlds out there but not all of them allow users to convert virtual currency to real-life currency. Second Life does. And thanks to her savvy dealings in online real estate, Graef had quite a bit of virtual currency to convert.

This is how she became a real-life millionaire in less than three years. She parlayed this success into a virtual world empire through her China-based company Anshe Chung Studios, a developer of anything from virtual fashion accessories to virtual property. This is not a one-off example. Similar profits have been made inside video games and social media and virtual reality will bring more of the same. So when — not if, when — AI and robots start shrinking the job market, virtual reality will be one of our resources. And while we won’t all become digital moguls like Ailin Graef, it can provide a steady income.

We are already living in a virtual world

While the prospect of a virtual migration may spook some people, let’s admit it: we’re already living in some version of a virtual world. A steady flow of information is already passing in and out of our world through virtual channels. Google, YouTube, Facebook, Twitter, text, we’re constantly living in a virtual bubble and we don’t even know it. And we like it that way.

The global population of internet users already spends a total of 1.25 billion years of human time online in one year alone. So when you think about it, the move to uploading our minds to live forever on the internet or to make our living in a world that turns on at the flick of a switch really isn’t that much of a stretch. We just have to be willing to take the leap.