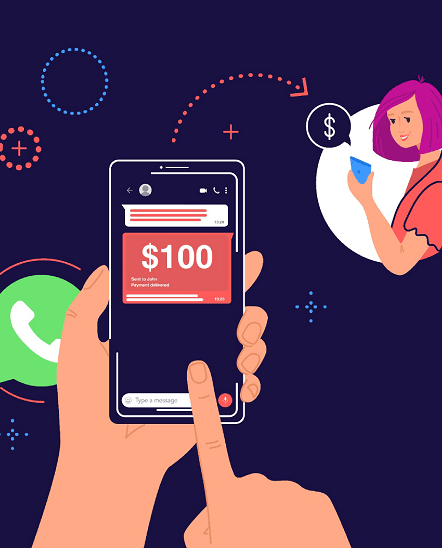 WhatsApp has just launched a WhatsApp payment service in Brazil, titled Whatsapp Pay, which will allow users to send money to one another and buy products from small businesses on the app for free. This is the world’s first wide rollout of this service and the move comes as part of parent company Facebook’s plans to coax more e-commerce traffic towards its platforms. And since its attempts to launch this innovation nationwide in India — WhatsApp’s largest market globally, with over 400 million users — have been mired in a data regulation quagmire for over 2 years now, it made sense to switch tact and make Brazil the debut region for WhatsApp Pay instead, the messaging service’s second-largest global market.

The transactions on WhatsApp will be made possible through Facebook Pay, a payment service launched in November of last year that works with credit cards and lets users send and receive money across Facebook, Messenger, Instagram, and WhatsApp apps. But while payments between people are free, businesses do have to pay to get in on the fun. This will comprise a processing fee to receive payments from their customers. Facebook CEO Mark Zuckerberg stated in January that the social media giant plans on rolling out this service in Indonesia and Mexico as well, countries that also rank among the world’s top markets for WhatsApp usage. So with the global spread of this new payment service appearing to be imminent, this begs the question:

What about the banks?

Let us first and foremost dispel the notion that this is the end of banks. It is not. WhatsApp Pay namely requires users to link up their WhatsApp account to a Visa or Mastercard credit card (or debit card) to be able to make payments. And it’s not like you can get those at the nearest supermarket. Banks are still very much in play. In Brazil, for instance, WhatsApp Pay kicked off in partnership with banks, i.e., Banco do Brasil, Nubank, and Sicredi. And over in India, it is the data localization norms of the Reserve Bank of India (India’s central bank) that have proven to be the biggest bottleneck for getting this payment service past a minimal soft launch there.

Moreover, while European countries ranked among the world’s top 5 in WhatsApp market penetration in 2019 — meaning how much WhatsApp is being used by consumers compared to the total estimated market for it — not all European banks will need to make way for this digital payment Valhalla either. The use of Norse mythology is apropos since we find the most salient example of European banking resilience in Norway. There, over 100 banks have formed a coalition to launch a mobile payment service app called Vipps, headed by Den Norske Bank, the country’s largest financial services group. For the longest time, this made the Scandinavian country turn a shoulder worthy of its arctic winters to the entry of Apple Pay. This does not bode well for WhatsApp Pay’s chances there. And banks in Sweden and Denmark have also launched mobile payment service apps of their own.

Adding to this gridlock, in every European country, the majority of the population will still opt to keep their money at a bank over a social media company every time.

But in other parts of the world…

By contrast, a country like Brazil, where 45 million people do not have a bank account but do have access to a mobile phone, is a goldmine for Facebook’s WhatsApp Pay. This untapped market is valued at BRL 800 billion (roughly $147 billion). And at the end of the day, a big tech company like Facebook also has more distribution reach than traditional banks. And with its move into everyday monetary transactions, it’s likely to be a matter of time before Facebook or the next highest tech company bidder takes those transactions over and clinches the public’s trust in their capacity to keep their money safe too.

And Brazil is not alone in this story. As recently as late 2019, close to 2 billion of the world’s adult population was still going about their lives without a bank account while the availability of cheap capable smartphones continues to see a global explosion. And it just so happens that, as recently as February 2020, the amount of WhatsApp users worldwide also numbered around 2 billion. So the ground is more than fertile for sowing with a mobile payment solution of this caliber.

Even Europe may prove more receptive than expected. The European Union’s directive for payment services has recently been revised in such a way that many European banks have felt pressed to give third-party providers access to accounts. This opened the flood gates for the financial solutions of fintech and big tech companies.

So all things considered, we could be looking at a reshaped payments landscape in countries all over the planet. Much like the Chinese e-commerce and gaming giants Alibaba and Tencent have done in China with their rollouts of Alipay and WeChat Pay respectively. These inventions have created a $17 trillion mobile payment market — Alipay through the introduction of its mobile e-wallet and Tencent through its integration of a payment product (WeChat Pay) into its massively popular social messaging app WeChat. They continue to dominate this market, with 93 percent of the mobile payment segment under their control.

Though likely to spread far and wide, mobile payment solutions will not bring about a dramatic and swift end to the reign of traditional banks, as some are predicting. It may actually present an opportunity for tech companies and banks to work together. After all, even China’s mobile payment fairy tale has a banking protagonist — the meteoric rise of Alipay and WeChat Pay was due, in part, to widespread bank account ownership among the Chinese population.

However, if banks are not careful, tech companies could become the Brutus to their Julius Caesar. The mobile payment services these companies offer are namely very attractive to small businesses — that often have to wade through bureaucratic muck to make transactions at banks — and the general public because they offer solutions that make it easier to pay and get paid. And part of the reason such a significant portion of the global population is still unbanked, especially in emerging markets, to begin with, is that so many people are beginning to use Fintech solutions accessed via mobile phones and the internet.

So while it is true that banks continue to hold sway over the public’s trust at the moment in most parts of the world, the last thing they should do is be complacent. Being proactive and offering competitive services will be key here, lest they face an exodus. But if the recent actions of European banks with regard to tech companies and mobile apps are any indication, they have their eye on the ball.

Update: Since the publishing of this article it has come to our attention that Brazil has suspended the use of WhatsApp Pay. Just as in India, it was Brazil’s central bank that turned out to be a determinant agent in the service’s fate. The bank said in a statement that it made the decision to suspend WhatsApp Pay, in part, to “preserve an adequate competitive environment” in the mobile payments space. However, WhatsApp has also been testing the service in other countries with large markets of users so we are very likely to see another debut for WhatsApp Pay in the near future.