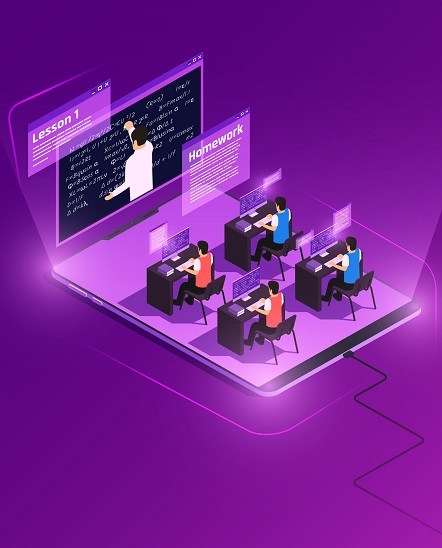 Technology is transforming much of how we live, work, play, even think. So it’s only natural that it is also molding how our children (and adults) will learn in the future. Many educators are predicting a wider use of interactive videos in classrooms and have also expressed an interest in introducing Artificial Intelligence (AI), Virtual Reality (VR), and Augmented Reality (AR) into the learning experience.

And of course, the social distancing effects of COVID-19 on schooling system worldwide — at one point all of the school closures affected 60% of the world’s student population, forcing many to get their school lessons online — have further amplified receptiveness for technology in education.

We must also not forget that automation is continually reshaping the job market landscape, forcing employees to routinely upgrade their skills. And they are going online to do so as they do not have the time to spend three to four years at a university to get an additional degree. So expect to see an even sharper uptick in online learning, which will increase the validity of online degrees, especially for Generation Z — the generation that reached adulthood in the second decade of the 21st century — who consider online education a far more respectable option than the generations who came before them.

AI education Is booming in China

In 2017, the Chinese government published a mandate for the country to collectively push for advancement in AI technology, using education as the primary launch point. This laid the groundwork for the country’s rise to its current standing as a global highflyer in AI education (as well as AI advances in other fields). The result has been preschool classrooms with robots that measure children’s health and engagement levels, student uniforms with chips that track the students’ locations, and even machines that track how often high school students check their phones in class.

But it’s the most recent manifestation of these efforts that is particularly telling for the future. An experiment has namely been rolled out to certain schools in which children are given AI headbands to wear that measure their concentration in classrooms, with the intent of improving their grades and, naturally, gather data. The data from these devices is sent to a machine that, in turn, creates a report of the children’s concentration patterns for their parents and texts it to them in a chat group. Though several factors can affect the accuracy of the headband’s reading— if it is not set up properly, for example — teachers have reported that the devices have made the pupils more disciplined in class.

Promising possibilities for technology in education

While the Chinese model may border on the extreme and raises some privacy issues, it does not disprove the potential of the AI education market. Take the AI-driven language learning app Duolingo, for example, one of the world’s most downloaded education apps. A study has shown that spending just 34 hours on the app gives users the same level of language education as an entire semester at a university. And AI features like chatbots — a computer program that simulates human conversation through voice commands or text chats or both — are also increasing in popularity among teachers. They can namely help them grade papers, with 92% accuracy and in significantly less time. Many in the world realize the potential of these applications in education, which is why the AI education market was recently projected to reach a value of $6 billion by 2025.

But it’s not just gadgets and computer software that are defining next-generation education. Educators are also looking to flip the entire teacher-student dynamic on its head, with the appropriately titled ‘flipped classroom’ system. In this model, homework happens before lessons, teachers don’t simply stand in front of the class to give lectures, and students don’t just come to class to sit in rows and listen. Teachers record structured homework content for students to learn at their own pace beforehand and then help these students with solving problems when they come to class.

But make no mistake, technology is central to this paradigm shift; multiple monitors that allow students to review course materials and look things up on the internet form the linchpin of this flipped classroom enterprise. This intersection of traditional teaching and the use of online media is also known as ‘blended learning’.

This is all in the vein of the increasingly popular move towards a more personalized education model, in which skills such as communication, creativity, and critical thinking are cultivated and students get to help plan and assess parts of their curriculum. This has already proven to be successful in Finland, a country with one of the world’s most renowned educational systems.

While high-tech education is the way of the future, it must also go hand-in-hand with social change and a more equal distribution of wealth; in 2014 the United Nations Department of Economic and Social Affairs (UN DESA) published a report which stipulated that 188 million children still go to schools without electricity.

And we must also remember to keep the children’s well-being in mind. While the AI headband experiment did sharpen the children’s focus in the classroom, it also added an overwhelming pressure to keep their grades up to the mark. This is bound to have a negative effect down the line. So as long as we remember that technology is an instrument and not a goal in itself, we can be sure we are using it to develop humans capable of navigating change, not robots with passports.